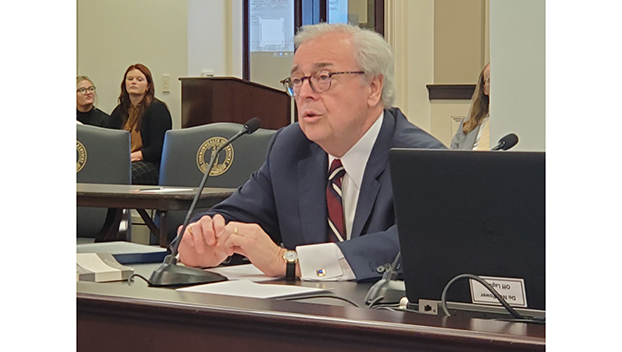 He spoke about the topic on both the local district and circuit trial courts, as well as at the appellate level.  While lawmakers have passed legislation that moves one of two judgeships around, he noted that it has been a long time for comprehensive statewide redistricting of Kentucky’s district and circuit courts.

“The last time there was a statewide recircuiting was in the 1890s,” he told the panel.  “As a matter of history, Grover Cleveland was in the White House, and John Y. Brown the First was Governor of the Commonwealth.  Perhaps the time has come for us to take a look at it.  In fact, I hope we do.”

In 1975, voters approved the Judicial Articles, which created for the first time, a Kentucky Supreme Court.  Before that, the Court of Appeals was the only appellate court in the state.  Minton told the committee the seven appellate court districts were not changed then and have remained the same to this date, despite large population shifts since then.

He said since counties cannot be divided between appellate districts according to the Kentucky Constitution, one district consists of Jefferson County with 700,000 people, while the population of the other 119 counties is divided by six, the remaining number of districts, to determine what the ideal population is for each of them, which is a little over 600,000.

Rep. Jason Nemes, R-Louisville, wondered how redistricting can be done fairly.  “If we don’t split Jefferson County, we still have two districts, the one centered around Lexington and the one centered in northern Kentucky, that are nearly 700,000 while there are three with 400,000.  That seems to me like we have unconstitutional dist4ricts in the appellate courts.”

Minton told Kentucky Today after his appearance that the Supreme Court, along with the Administrative Office of the Courts are working on comprehensive redistricting plans for the trial courts for consideration during the 2022 session, which is when lawmakers will also take up legislative and Congressional redistricting, if Gov. Andy Beshear does not call a special session before then.

What complicates the matter is Commonwealth’s Attorneys follow the circuit court boundaries, so those will have to change as well.

Minton added, appellate court redistricting will have to be addressed by lawmakers, and not drawn by the courts.