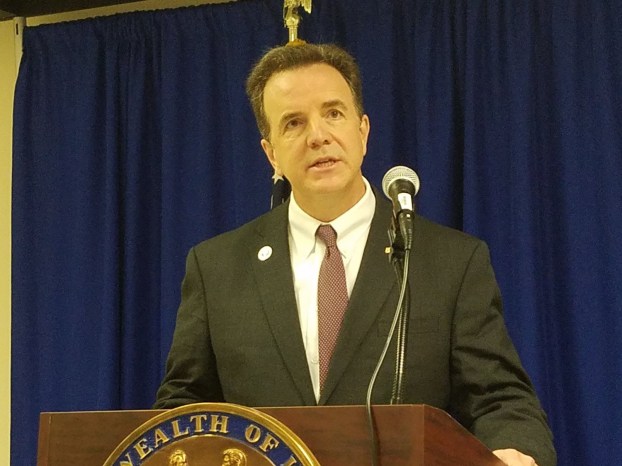 Democratic Gov. Andy Beshear has picked up a Republican opponent for his anticipated 2023 re-election bid, in the person of Kentucky Auditor of Public Accounts Mike Harmon.

“My launch is not filled with fireworks and fanfare, but merely my strong determination to help renew Kentucky and hopefully help this state become the best version of itself it can be,” he said in a statement issued on Monday saying that he had filed the paperwork announcing his intention to seek the Republican gubernatorial nomination.

“Over the last year and a half, sadly Kentuckians have had their liberties and their livelihoods suspended and stolen while promises to make those losses whole have gone for the most part unfulfilled,” Harmon said.  “I learned a long time ago to make few promises because someone’s word should be their bond, and that bond, if at all possible, should be honored and unbroken.  But I will make this promise that if I am elected, I will do my best to take time to listen to the people of Kentucky and to serve each and every one to the best of my abilities regardless of their political affiliation.”

Harmon was first elected to the State Auditor’s post in November 2015, and won re-election for another four-year term in November 2019.  Under the Kentucky Constitution, he cannot seek a third term.

Some of the accomplishments he points to while in the auditor’s office: completing high profile audits and examinations of entities and programs such as the Commonwealth’s public retirement systems, the Administrative Office of the Courts, KentuckyWired, the University of Louisville Foundation, the Kentucky Law Enforcement Foundation Program Fund, and many others.

He previously served in the Kentucky House of Representatives for 13 years representing the people of Boyle and Casey County, and previously Washington County, in the 54th District.

Harmon graduated from Eastern Kentucky University with degrees in math, statistics, and theater, and was valedictorian of his Boyle County High School class.  He also serves as a deacon and church moderator at Junction City First Baptist Church.

In his candidacy announcement, Harmon included the mission statement he adopted after his first successful election to public office, one he says he has tried to live by:

Harmon is the first person to announce their intention to run for Governor in 2023, and has filed the paperwork necessary to do so with the Kentucky Registry of Election Finance.

Recent guidance from the U.S. Centers for Disease Control and Prevention regarding mask usage due to the COVID-19 pandemic when... read more