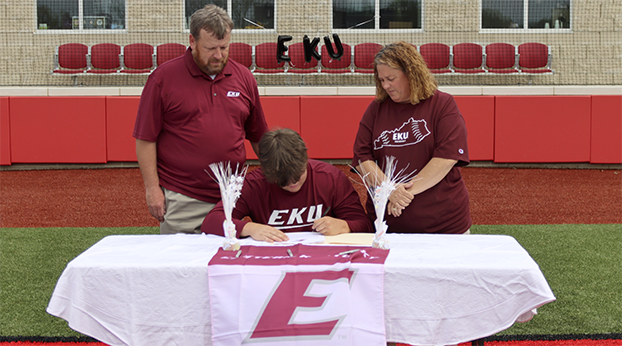 After five seasons in a Cardinal uniform, GRC Baseball senior standout Aaron Abner is trading in the Cardinal red for the Colonel maroon. On Wednesday afternoon, Abner officially signed a letter of intent to play collegiate baseball for Eastern Kentucky University.

“EKU really felt like home from the beginning,” says Aaron. “I truly feel like it’s the right place for me and the place that is going to get me where I want to be in the future.”

Abner is a 6’-1” left-handed pitcher who has tremendous ball control and command of his pitches. He tops out at 89 miles per hour and flashes a changeup in the high 70s, along with a breaking ball that touches in the 70s as well. His career earned run average (ERA) for the Cardinals is 1.83, which just goes to show how lethal he can be on the mound.

Not only is Abner a phenomenal pitcher, but he is also a lights-out hitter in the batter’s box. Topping out with a 97 mile-per-hour exit velocity off his bat, he has the power to homer in any part of the park. 14 games into his senior campaign, he has already hit three home runs, bringing his career total at GRC to 10.

But it doesn’t just start with an 89-mph fastball. Aaron was born and raised in Clark County, where he learned from a young age that baseball was his passion. Most of his childhood was spent playing for the Clark County Legends summer travel ball team, where he learned the fundamentals of the game and the fire to want to be the best.

“I’ve played with and against the best my whole life,” says Abner. “The competition is what keeps me going, knowing that I can be better is what makes me want to compete.”

Abner also plays for the KBC Prime 18u team, which is arguably the best travel ball team in the state. Playing for a team like this just shows you his dedication to reaching his top potential.

Abner, according to prepbaseballreport.com, is currently ranked 18th overall in the state in the class of 2021. This high ranking was a result of a tremendous amount of work throughout his career. All that hard work culminated Wednesday with his commitment to the EKU Colonels.

“It’s such a blessing to be able to sign to play Division 1 baseball,” says Abner. “A lot of blood, sweat, and tears went into making that happen. I just want to thank my family, my parents, especially, for always being there for me and believing in me.”