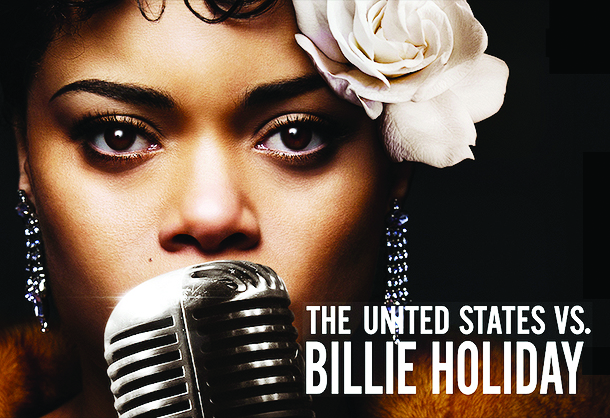 ‘The United States vs. Billie Holiday’

Eighteenth-century British statesman and philosopher Edmund Burke is credited with saying, “Those who don’t know history are destined to repeat it.” Such wise words still resonate true today on this day in 2021.

We continue to strive for social equality as we fight for improving all aspects of our lives personally, professionally and as members of a shared society. Every day, we fail.

We can add all of the technology upgrades to make our days easier, but we fail to meet the essence of what it means to be human, showing empathy and collectively fighting together against the toxic ideologies of racism. We haven’t grown to learn from history’s lessons stemmed from our ugly behaviors surrounding racism, prejudice, and abuse of authoritative powers since the birth of man.

Today’s yarn addresses just that, so let’s jump into the history time machine as we take a look at the award winning, Oscar nominated biopic, “The United States vs. Billie Holiday” (2021).

“The United States vs. Billie Holiday” stars Andra “Cars 3” Day as legendary jazz singer Billie Holiday in the 1940s when she becomes a target by the FBI in the covert efforts to radicalize the war on drugs while creating the perception that the civil rights movement was subversive against the ideals of the American government all the while starting the civil rights movement without knowing it.

Holliday was an easy target as she was a known heroin addict, but she became a target due to her singing the controversial and popular “Strange Fruit.” The 1939 song was bold at the time as Holliday sang it with gut wrenching, chilling voice as she sang about black bodies hanging from the poplar trees in the South due to the unspeakable deplorable crimes of lynching.

“Strange Fruit” was a hit and loved by white and black fans alike as it fueled the fires of J. Edgar Hoover’s FBI through corruption and manipulation tactics helmed by Federal Bureau of Narcotics commissioner, Harry Anslinger (Garrett “Friday Night Lights” Hedlund).

Anslinger, a known racist, threatened Holiday to stop performing “Strange Fruit” by targeting her and other black musicians through harassment, planting drugs and lengthy prison terms as part of his strategy to justify his department’s need, credibility and government future funding.

Anslinger, while creating a skewed narrative of the real truth using ambitious black FBI agent Jimmy Fletcher (Trevante “Bird Box” Rhodes) to assist in destroying the sultry singer as she falls in love with the undercover fed.

“The United States vs. Billie Holiday” was directed by Lee “The Butler” Daniels with a screenplay by Kentucky-born writer Suzan-Lori “Girl 6” Parks based on a chapter from Johann Hari’s 2015 book, “Chasing the Scream: The First and Last Days of the War on Drugs.”

The film has received much praise by viewers, a favorite on streaming platforms, and Andra Day’s performance is heartbreaking as she embodies Holiday to a T that the viewer feels every high and many lows in this tragic story. The portrayal of Holiday is more honest with the display of her personality, flaws, relationships, and the overzealous motivations of the government than in earlier releases, 1972’s “Lady Sings the Blues” starring Diana Ross and 2016’s “Lady Day at Emerson’s Bar & Grill.” These releases were full of gloss and fluff where Day’s performance in tandem with the talents of Parks and Daniels pulls off biopic full of gritty realism and honesty towards our past, present and future in regard to authority vs. race.

People, no matter what color should be measured in their honesty, character, and achievements which help their neighbors, not by color. Though everyone knows racism is wrong, it still goes on. It takes all to make a change but until we all start to work as a team, racism will continue to breathe amongst us. Do your part to speak out against injustice, makes your voice heard against crimes towards humanity, and the overall evil that is displayed to our neighbors.

“The only thing necessary for the triumph of evil is for good men to do nothing.” – Edmund Burke

Have a productive & film-tastic day!

Paying for college during COVID-19

BY SHONDA JOHNSTON Extension Agent for Consumer and Family Sciences The pandemic has affected most aspects of family life, including... read more