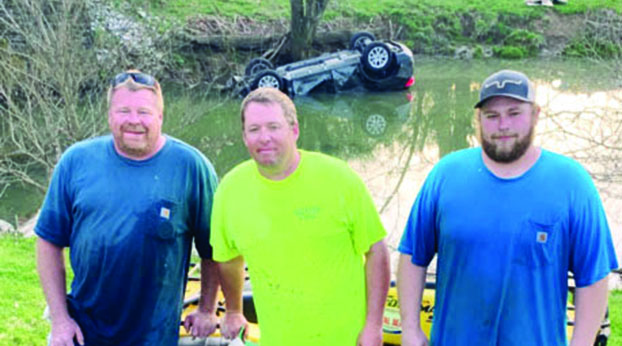 These three area residents played a big part in rescuing a man trapped in his vehicle in water when he went off the road and into a creek on Donaldson Road Monday. From left to right are David Begley, Jason Burden and Caleb Chanslor. (Submitted photo)

Three men who live near where a car crash happened on Donaldson Road are being hailed as heroes by firefighters for helping to save the driver.

Battalion Chief William Puckett of the Clark County Fire Department said that when he and other firefighters arrived at the scene of the accident Monday afternoon, the three — David Begley, Jason Burden, and Caleb Chanslor — were in the water with the man, Zachary Pelfrey, 27, of Lexington, and had used axes, an iron digger, bolt cutters, and other instruments to gain access to him through the rear hatch, and were keeping him calm until more help arrived.

“They jumped right in and did their part,” Puckett said. “They went above and beyond.”

And even after firefighters arrived, the men stayed with him until the ambulance came to take him away.

According to the report by the Clark County Sheriff’s Office, the accident was reported at 6:26 p.m. Monday at 700 Donaldson Road. Pelfrey was traveling west on Donaldson when he came around a curve, hit a bridge embankment, and flipped the vehicle, which landed upside down in the creek.

The deputy who worked the accident said he arrived 30 minutes after the accident and noticed there was a “bright glare” at that time of the evening in the location where Pelfrey ran off the road just after the curve and 21 feet before the embankment.

Pelfrey was complaining of injuries and was taken by ambulance to Clark Regional Medical Center.

Puckett said that when firefighters arrived, Pelfrey was in the back seat shoulder-deep in water.

“They couldn’t have gotten him out without him going underwater,” and the victim didn’t want that, so the men stayed with him and kept him comfortable, the battalion chief said. “He was very cold,” but didn’t seem to be badly hurt.

He said there were wives and girlfriends and others who helped by bringing tools and things like that.

“They did something they didn’t have to do,” he said. “To me, they’re local heroes.”

This is an artist’s concept of what the Winchester Farmers Market on Depot Street will look like once the covered... read more