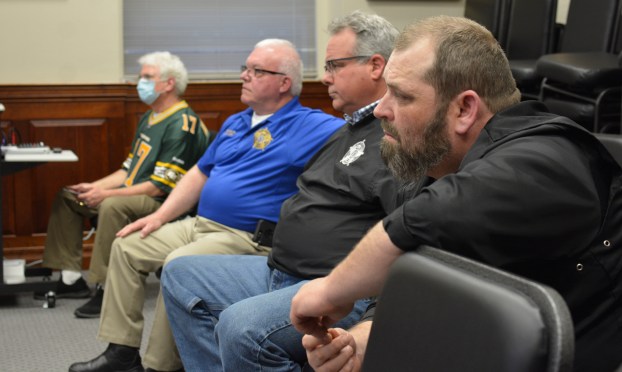 Jailer Frank Doyle, second from left, and members of his staff listen to a discussion about jail funding at a Fiscal Court meeting, (Photo by Randy Patrick)

Counties need help from the state and cities to pay for incarcerating inmates, two magistrates told the Clark County Fiscal Court last week, after they had voted to transfer $600,000 from other funds to keep the county jail open.

Magistrate Chris Davis was the one who raised the issue. He said it may be too late for the state legislative session that ends today, but he hopes that during the interim prior to next year’s 60-day session, lawmakers will work on a bill to “alleviate the burden on counties and county taxpayers.”

Davis suggested that the state is going to have to allow counties to require cities to contribute to the upkeep of the lockups.

“I think there is a definite free rider problem when it comes to municipal government,” Davis said. “It’s a very unfair situation that we have. I’m not afraid to say it. It’s not right.”

Considering there are more inmates who are arrested by city police than sheriff’s deputies or state police, he said, counties should be allowed by the state to bill cities for the inmates it contributes to the jail numbers, just as it bills the state for state inmates.

“We’re not going to get any more money from the state. If anything, we’re going to get less money,” he said, so some of that additional funding is going to have to come from cities.

The situation, he said, has brought counties “almost to the breaking point,” and even regional jails have been adversely affected. “It’s coming to a head,” he said.

Davis suggested that his fellow county officials talk to others within their associations, such as the Kentucky Association for Counties and the Kentucky County Judge/Executive Association, to influence state legislators to come up with a solution.

Magistrate Greg Elkins agreed with Davis that something has to be done to help counties.

Elkins said Clark County is “going to keep getting cut by the state one way or another” each year, and “somebody’s going to have help us with this expense. It’s not sustainable. We can’t keep doing this year after year.”

According to County Judge-Executive Chris Pace, the transfer Elkins referred to that the court had made that evening was about $450,000 from a U.S. 60 sewer line fund and $150,000 from a “rainy day” fund, both of which were set up as reserve funds to use this year in case the county had a need like the one involving funding for the jail.

Pace said the Clark County Detention Center has had a shortfall in revenue this year due to having fewer state and out-of-county inmates in its cells.

Pace explained that last year, during the coronavirus crisis, when the potentially deadly virus was running rampant through jails and prisons (but not Clark County’s jail) Gov. Andy Beshear ordered the release of large numbers of state inmates “back into society.” As a result, the local jail has about 75-100 fewer state and out-of-county inmates than it did before. At about $30 per day per inmate, that adds up, he said.

“It’s almost as if they’ve pulled the rug out from under us,” Pace said during the meeting Thursday. “For decades, they did what they could to encourage jails to be built to house more and more inmates, and now all of a sudden, they just take them all away.”

Pace also pointed out that when a city annexes county territory, as Winchester’s officials recently talked about doing, it deprives the county of needed payroll and net profits tax revenue because employees and businesses then have to pay those taxes to the city, but no longer to the county government, and that affects how much the county has to pay for services such as the jail.

“Every time a good employer is annexed to the city, that takes money that the county would have used to pay for the jail and puts it in the city’s coffers. This isn’t just a Clark County problem, it’s a problem around the state,” Pace said. “We need to start working together on these things instead of letting them divide us.”

Magistrate Travis Thompson, who is a sergeant for the Winchester Police Department, did not speak on the issue during the meeting, but in response to an email asking for his thoughts on the subject, he offered a very different perspective from Davis and Elkins.

Thompson said that the state law has placed the responsibility of operating jails solely on the counties, and while it may not be inappropriate to discuss legislation to change that situation, “it is inappropriate to call the city a ‘free rider’ because they do not help fund the jail.” He said the county took in more than $1 million in property taxes from within the city limits last year, but the county provides few services to city residents, mainly incarceration of prisoners and animal control.

“Every individual that gets taken to the Clark County Detention Center is arrested within Clark County, and we have a responsibility to operate the jail. We receive more than enough revenue from things within the city limits to cover the city’s part of these expenses,” he said.

Thompson said Magistrate Robert Blanton was right to say during the meeting that city and county officials need to come together to discuss expiring revenue agreements and work out “something that works for both entities.” But magistrates “don’t need to be worrying about something that we don’t even have a say in” with regard to a county’s statutory obligation to care for inmates.

Saturday in the park

Legacy Grove was crowded with kids of all ages from all over the Bluegrass Saturday as they enjoyed a break... read more