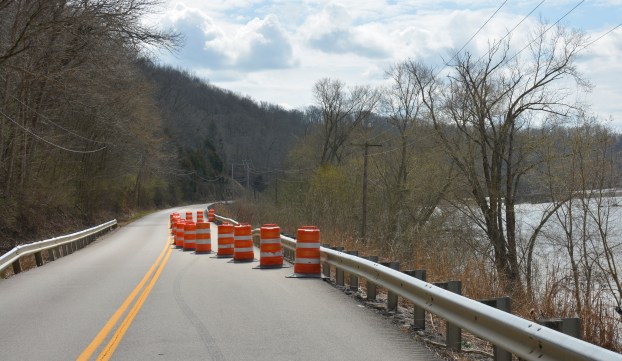 Ford Road remained closed Wednesday afternoon because of a slide. The state Department of Highways said there is not yet an expected date for repair. (Photo by Randy Patrick)

The slide at mile point 1.5 is near Ky. 627 and the intesection ofAthens-Boonesboro Road along the Kentucky River.

The state Department of Highways has placed signs and several orange barrels on each side of the slide to warn drivers.

Natasha Lacy, a spokesperson for the Transportation Cabinet in Lexington, said that as of Tuesday, there was not yet an anticipated date for repair because engineers were determining what method would be best to remedy the problem. She said the slide was noticed after the recent floodwaters had receded and was probably caused by oversaturation of the soil beneath the asphalt.

The road had also been closed because of flooding the first week of March.

Also, Nest Egg Road (Ky. 646) at mile point 7.44 in Montgomery County near the Clark County line is still one lane weeks after the heavy flooding of late February and early March. According to the District 7 transportation office, the date for reopening has not yet been determined.