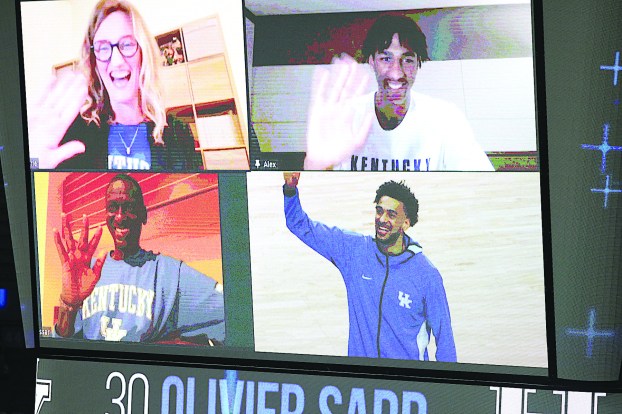 Olivier Sarr got a virtual visit from his family in France at UK’s Senior Day. - Vicky Graff Photo

Olivier Sarr admits that not a lot of people in his native France know a lot about Kentucky basketball.

Even though this season has not been a typical successful season for UK, Sarr says it has been “amazing” despite the 8-14 record. That’s why he tells those in France it has been a “blessing” to play at UK this year after spending his first three seasons at Wake Forest.

“It’s amazing to put on that jersey that, four years ago, I would have never thought I would be in this position today,” Sarr said. “Not a lot of kids in France get a chance to play for Kentucky or a school like that.

“I mean, I’m blessed honestly. All I can tell them is I’m trying to take as much as I can while I’m here and keep moving forward. It’s an amazing experience.”

I asked Sarr if he was considered a role model in France, a notion he downplayed.

“I know a lot of people follow what I’m doing here. I don’t know if I’m a role model or not. I’m trying to behave myself as best I can,” he said. “I’ve got a little brother (Alexandre), so I’m trying to set the example for him even though he doesn’t really need me right now. He plays for Real Madrid.

“That’s who I’m trying to, not impress but lead, and hopefully and it inspires a lot of younger kids to pursue their dreams too.”

Sarr was moved before UK’s Senior Day game when his parents and brother back in France joined the pregame ceremony virtually on the Rupp Arena video board.

“A lot of feelings, man. It was just unbelievable to see them out there and see their faces right before my game. It’s been a long time, as a lot of people know, because of the pandemic,” Sarr said. “It was just an unbelievable feeling to see my brother and my parents out there watching the game. It was just fantastic.”