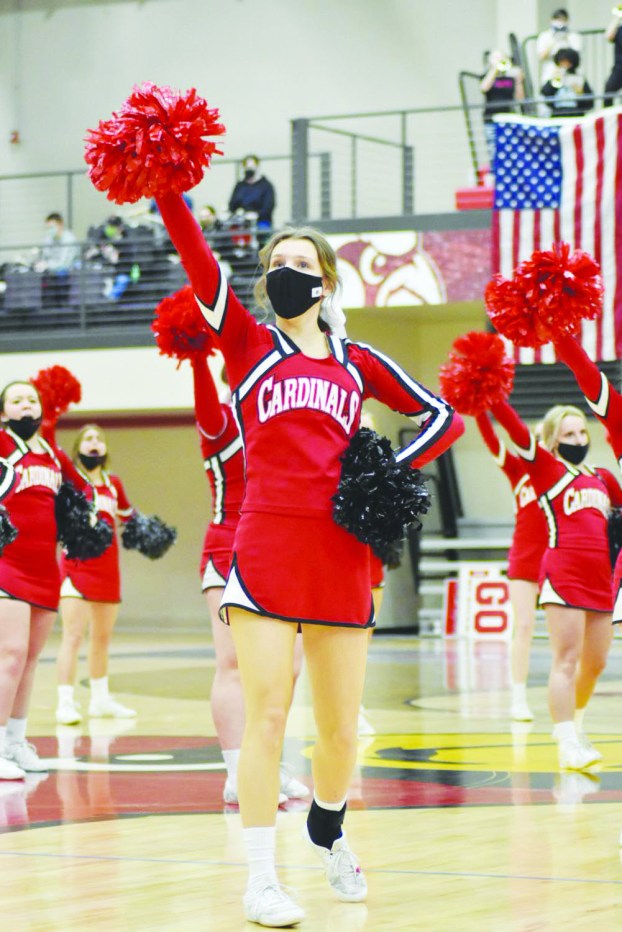 “And next up in the medium, all girl division, your George Rogers Clark Cardinals!”

You feel the butterflies in your stomach while you walk on the mat with your team.

You hear your coach scream “Music’s on,” as you get ready to hit this routine.

You have one shot to show everything you’ve worked so hard to achieve this season.

This year we will still hear that “Musics on!,” but it will be in our auxiliary gym while our coach holds a camera with no people except our team and our two coaches.

Going into this cheer season we knew it was going to be a very different year and no one knew what 2020 and 2021 had in store for our team.

Despite the fact we were in a pandemic we were still super excited for this year.

We had just gotten a new coach and new athletes and we were ready to get into our competition season.

Our team was supposed to have an in-person competition on December 12th but unfortunately our whole team had to quarantine and Clark County went into the red zone.

We were devastated. We had worked so hard and worked through so many obstacles and now we weren’t going to be able to compete.

There are still no in-person competitions, but we are going to be competing in the UCA February Virtual Challenge on Feb. 24.

This is GRC’s first time ever participating in a virtual competition.

For this competition we had three days to film a video of our two and a half minute routine and then we submit it to the competition.

Our video will be judged and the awards will be live shortly after that.

In the video we do the exact same thing we would do at a competition.

We just have as many chances as we need to get it just right.

We still get into uniform and do all of our pre-comp rituals; it will just be in our own gym with no one else there.

We are still preparing just as hard as we would for any other competition because it has to be perfect.

Now that must be so easy because you can retake the video as many times as you want until you get it perfect.

Yes we do get to video it as many times as we want, but so does every other team in the competition.

In a real competition you could have a really good team get a bunch of deductions and another hit everything perfectly and win it all even though the other team is really good because everyone only has one shot.

This means for this virtual competition it is all about the technique and the small details that make a routine perfect.

Even though we can’t be on the mat with a big crowd cheering us on I am still so thankful that we are able to compete.

It may be different, but it’s still a season with my team.

BY LARRY VAUGHT Vaught’s Views While the UK men’s basketball team is not having the season most expected, the Kentucky... read more