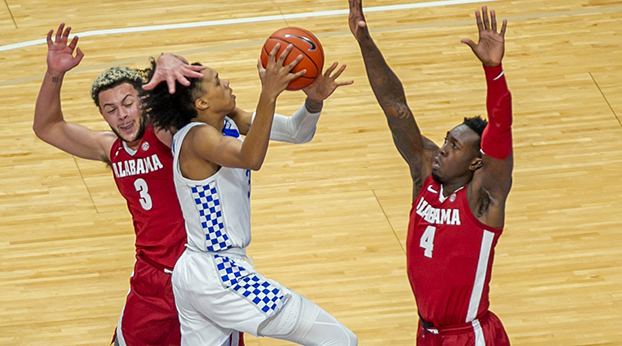 Kentucky's Brandon Boston Jr. is fouled going to the basket against Alabama earlier this season. - Photo by Tammie Brown/Kentucky Today

Cats are underdogs in rematch with No. 9 Alabama

Kentucky isn’t used to being the underdog and will face a rare role reversal when it takes on No. 9 Alabama on Tuesday night in Tuscaloosa.

The Crimson Tide (13-3, 8-0 Southeastern Conference) is enjoying their highest ranking since 2007 and carries a nine-game winning streak into the contest. Alabama defeated the Wildcats 85-65 on Jan. 12 and showed no signs of letting up last week with wins over LSU (105-75) and Mississippi State (81-73).

“Everybody is hunting them right now,” he said Monday. “They’re in first place. They’re undefeated in the conference. We’ve just got to play better than we did the last time. We’ve got to do some things differently. But they’re the hot team in the league right now, so we’ve got to give them our best.”

Following his team’s 82-69 victory over LSU to end a three-game conference losing streak last Saturday, Kentucky coach John Calipari is ready for a rematch against the Crimson Tide. Calipari said “we broke down, they played well” in the previous meeting nearly two weeks ago in Lexington.

“These are the games you want to play to where, you know, you’re not supposed to win the game,” the Kentucky coach said. “Now you go and it gets you going, you play. Instead of playing not to lose, you play to win.”

Alabama is one of the top 3-point shooting teams in the country and leads the SEC with an average of 13.3 made per game against league foes. The Crimson Tide made a conference-record 23 treys in a 105-75 rout of LSU last week. Alabama drained 14 3-pointers in the double-digit win over the Wildcats earlier this month.

A point of emphasis for the Wildcats, Flint said, is to simply defend Alabama’s long-range attempts and avoid turnovers.

“We’ve got to do a better job of contesting and we can’t turn the ball over to them so they get unguarded threes in transition because we turned the ball over,” he said. “That’s when they’re at their best, when they get up and down and shoot the 3-ball. A big deal is going to be how we handle the ball. Make them play a little bit of defense and try to do as best we can of contesting the 3-point shot because they’re going to shoot them.”

In the first game, Alabama took advantage of Kentucky’s mistakes and converted them into points while in transition. The Crimson Tide scored 28 points off 19 turnovers.

“If we have that high of a number, it doesn’t matter who we’re playing (it’s going to be hard to win),” Flint said. “They’re even more dangerous because they’re probably the best offensive team in the league. If you give it to them off turnovers, they’re going to convert them — points off turnovers, physical play, that’s going to be a big part of this game.”

The players also are looking forward to the rematch.

“It’s a good challenge,” Kentucky senior Olivier Sarr said. “We’re going to war over there and I know that the guys are ready. So, it’s a great challenge for us. They talked a lot during the game, so we’ve got good motivation.”

Keith Taylor is sports editor for Kentucky Today. Reach him at keith.taylor@kentuckytoday.com or Twitter @keithtaylor21