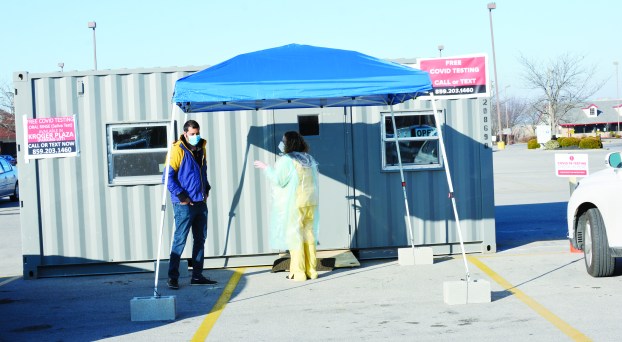 Signs in the Kroger parking lot offering free COVID-19 testing lead to what looks like a big metal shipping container, which is a mobile testing site for an Ohio, company that says it is offering the one of the few oral rinse tests in the area.

Bridget Gibson, a medical assistant for Clinical Lab Consulting, said the rinse is less uncomfortable and for children, less frightening, than having a long swab stuck up one’s nose.

“You just swish it around and spit it out,” she said.

The test sample is sent off to a lab, and it takes between 48 and 72 hours to get the results, Gibson said.

Those wanting to be tested just drive up and give the workers their phone number, and they register and someone will come out and give them the test.

Some of the people in the parking lot Tuesday were complaining that they had to take a number and wait. One woman said she had been waiting for more than an hour.

The testing site began operating in the Kroger Plaza parking lot on Monday and will be there for a couple of months, Gibson said.

She said they have been getting on average about 20 people a day.

“We have the capacity to do much more, but people are just finding out about it,” she said.

Their means of publicizing it are online ads and the signs in the parking lot, she said.

Gibson said the testing is free to some because of government funding.

“In Kentucky, if somebody has insurance, we’ll take it, but if they don’t, it’s OK,” she said.

Clinical Lab Consulting is based in Dublin, Ohio, near Columbus.