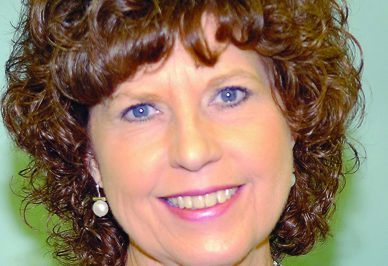 I was in the mood to bake, and thought I could come up with something with the ingredients I have on hand.

I also wanted to bake something I could take to The Winchester Sun office and share with them.

I thumbed through some of the recipes I’ve saved over the years and found this recipe for Cinnamon Roll Cake.

I’d printed it from https://lilluna.com. 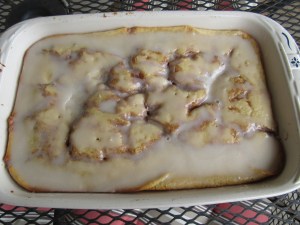 Swirl your topping and cake mixture with a knife going up and down the length of the pan (but only inserting it in the cake mix a little – not all the way).

Top with the glaze, which is made by mixing 2 cups powdered sugar, 5 tablespoons milk, and 1 teaspoon vanilla. Drizzle over the cake while it is still warm.

On Sunday afternoon after spending time in the garden, I decided to put this together. I greased a baking dish, sat it aside and pulled a large bowl from the cabinet.

Next, I poured the batter into the prepared pan and began putting the topping together.

I combined the brown sugar, flour and cinnamon before adding the softened butter then mixed well with a spoon.

I thought the mixture might be more like crumbs, but because the butter was softened, it ended up being a creamy texture.

I dropped globs of the topping over the batter then took a knife and did my best to swirl it without going too deep.

Finally, I placed the pan in the oven and waited.

After 30 minutes, I tested the cake and discovered it wasn’t quite done. I let it go for five more minutes, and a toothpick inserted in several spots came out clean.

Let me tell you, when I opened the oven, this cake smelled just like cinnamon rolls and made my mouth water.

I sat the cake on a cooling rack while I put the glaze together, which was easy as pie.

I started pouring the glaze over the warm cake and thought it was a lot of glaze for the amount of cake I had, but I didn’t stop pouring. I scraped every last drop of the glaze out of the bowl and onto the cake.

Since cinnamon rolls are best warm, I figured this cake would be too. 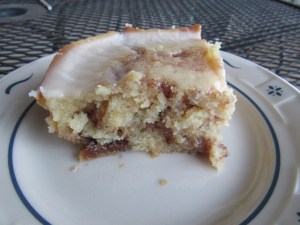 I cut Brad and myself a piece and we dug in.

Yum, yum, yum. This cake is delicious and does taste like cinnamon rolls.

Even though I’m a sweetaholic, I thought there was too much glaze on top, so of course, Brad also thought it was too much.

However, that didn’t stop us from eating it. It’s what I had for breakfast the next morning with a small glass of milk.

Even though I didn’t think I’d swirled the topping into the cake that much, the cinnamon topping seemed to sink to the bottom of the cake, but sure didn’t hurt anything.

After eating my cinnamon roll cake for breakfast, I sliced up some of the cake and asked Brad to deliver it to The Winchester Sun folks for them to enjoy, and I believe they did. Whitney let me know that she didn’t try it until Tuesday, but that it was very moist and just the right amount of sweet.

I’ll have to say this recipe definitely falls into the nailed it category and will be added to my self-made cookbook.

Our grandchildren had come for an overnight visit, and anytime they are at our house I try and have fresh... read more