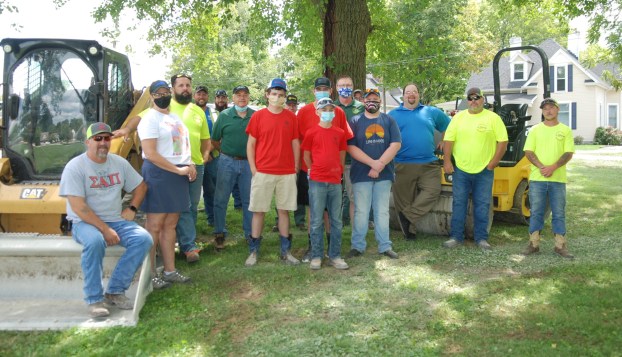 City and county officials stand with local Boy Scout T.J. Hampton at College Park Aug. 19 as he and volunteers worked on his Eagle Scout project. With the help of the Clark County Road Department and Winchester Public Works, Hampton is revamping the walking and fitness trail around the park. (Photo by Fred Petke)

The walking and exercise path around College Park got a long overdue makeover, thanks to some local Boy Scouts and other volunteers.

T.J. Hampton, a member of Winchester-based Troop 75, worked on the project for his Eagle rank, the highest available in scouting. It requires completing a public service project, including raising the funds and labor.

Hampton said he started talking to Winchester-Clark County Parks and Recreation about the project in February, but it was finally approved in August.

“We’ve just put down new gravel and will put up signs,” Hampton said. “(The path) has been here a long time. People have been walking in the road (and) it’s dangerous.”

On an August afternoon, volunteers and employees from Winchester Public Works and the Clark County Road Department were on site helping spread gravel along the route around the park.

“This project’s been in the back of my head for a long time,” former Parks Board Chairman Charlie Eury said. “(The path’s) been here a long time. The Telephone Pioneers built it. It was here long before I was.”

There are exercise stations at various points along the path, though Eury said those could stand to be rebuilt as well.

Hampton said he hoped to be finished in a couple of weeks with the installation of the signs.

The City of Winchester has obtained all but two parcels needed to begin redeveloping Lincoln Street. Those remaining two parcels... read more