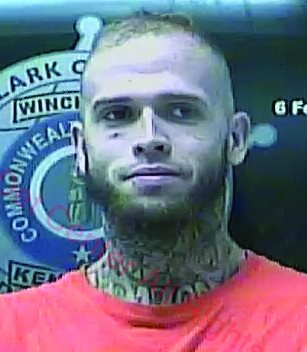 Police arrested a Floyd County man after he ran from officers and flung a bag at them that contained a loaded revolver and nearly a pound of meth.

Kyle J. Hicks, 31, of Garrett, was reportedly walking along West Lexington Avenue near Hays Street Wednesday afternoon when he was spotted by Winchester Police officers, according to the arrest citation. Believing there were active warrants for Hicks, officers stopped and attempted to speak with him, but he ran the other way and into traffic.

Officers followed where Hicks reportedly ran into one officer and threw a white bag he was carrying. Hicks was eventually arrested, after officers said he continued to resist and acted aggressively toward them.

When officers searched the bag, they saw a loaded revolver as well as about 400 grams, or 14.1 ounces, of suspected methamphetamine, a small amount of marijuana and three gabapentin pills, which is a controlled substance.

The revolver was reported stolen from Leslie County, police said.

He was lodged in the Clark County Detention Center.

No one wants to end up on a most wanted poster, but a Winchester woman recently found herself on one... read more