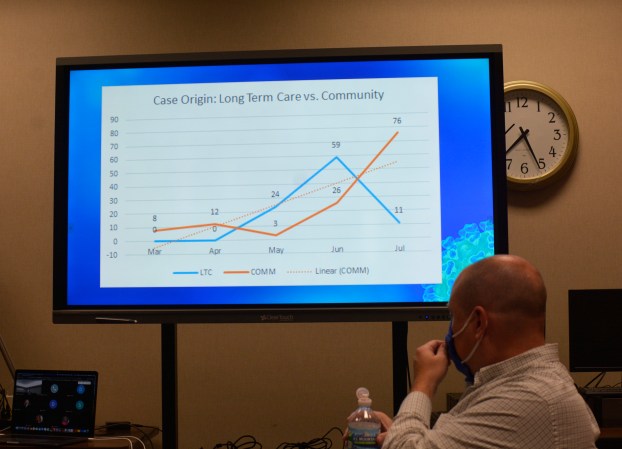 After leveling off in late spring, coronavirus infections in Clark County have been steadily rising over the summer.

As of 4:30 p.m. Tuesday, the Clark County Health Department reported 13 new COVID-19 infections in the community.

This came less than 24 hours after the department had reported six new cases late Monday evening.

Three new individuals were also reported as having met the criteria for recovery from the virus.

County Public Health Director Becky Kissick said an email her staff was working 44 active cases out of a cumulative total of 246 reported since March.

“Each of the active cases represent spread through the community,” she said.

The disease caused by the novel coronavirus has determined to have contributed to or caused seven deaths in the county.

In a presentation she made Monday night to the Clark County Board of Education before it voted 3-2 to keep school buildings closed for the first nine weeks of classes, Kissick talked about the numbers for Clark County.

The county reported its first coronavirus case on March 16, and compared to many counties, the numbers have remained relatively low. For a couple of weeks, they declined, but in May they started to rise, and are now trending upward.

In May there were 27 new cases, in June 85, and in July 88. In the first four days of August there were 26, according to the Health Department’s reports.

“We are definitely on an upward swing,” Kissick said.

One reason, the director said, that the Health Department gives separate numbers for cases involving long-term care and the community at large is so people won’t think the spread is mostly because of an outbreak at a nursing home. While Fountain Care’s positive case numbers have been going down, those in the community have trended sharply upward, according to a line graph she showed in a PowerPoint presentation.

“What we’re seeing now is the the predominance of our cases are … in the community spread,” she said.

And it isn’t mostly affecting the elderly. If the nursing home numbers are excluded, the average age of people with coronavirus in the community is 37 years, and 25 of the 183 cases she had shown in her presentation Monday night (which didn’t include the six reported late that day) involved children under age 18.

During his daily televised briefing Tuesday, Gov. Andy Beshear reported 700 new COVID-19 cases and seven more deaths for the state as a whole.

Of the 700 new cases reported Tuesday, 18 were children age 5 years or younger.

Beshear said he believes the numbers have been “leveling off,” although the number of cases reported Thursday was more than a week ago.

The current positivity rate for tests in the state as of Tuesday was 5.24 percent.

That is lower than it has been, but Kissick said Monday that anything above 5 is a “red flag.”

The Stuff the Bus school supplies drive started Saturday, but this year there’s no school bus to stuff. Instead, there... read more