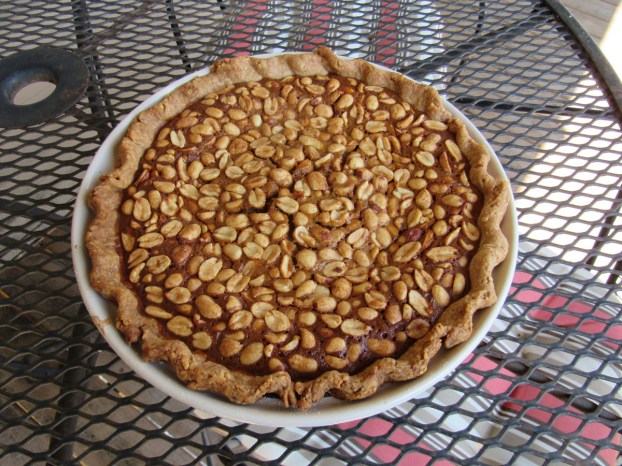 Crust:  Combine flour, peanuts, brown sugar and salt in a bowl of a food processor; process until peanuts are ground and mixture is combined. Add butter, peanut butter, and shortening, and pulse until mixture resembled small peas, 10 to 12 times. Sprinkle 4 tablespoons ice water over top of mixture. Pulse four times. Add up to two more tablespoons of water, one tablespoon at a time, pulsing after each addition until dough just begins to clump together. Remove dough from processor; shape and flatten into a disk. Wrap disk in plastic wrap, and chill two hours or up to two days.

Bake in preheated oven 10 minutes. Reduce oven temperature to 350 degrees and bake until puffed and golden brown and until center is set, 45 to 55 minutes, shielding edges with aluminum foil to prevent overbrowning, if necessary. Transfer pie to a wire rack, and cool completely, about 2 hours.

We were meeting Hannah and James for lunch and then they were coming to our house so James could give us an estimate on some construction work. Brad and I thought it would be nice to have some kind of dessert ready to serve.

Recently I’ve been going through some old Southern Living magazines and tearing out recipes that looked like something I’d like to try. In the November 2017 issue, I found an article titled “Lost Pies of the South.” Of course I had to save those recipes.

Most of them looked great and sounded even better, but there are a few I won’t be trying (Over the Moon Chocolate Pie and Grapefruit Chess Pie). The recipe for Georgia Peanut Pie jumped out at me and I knew I’d be trying it soon.

With Hannah and James coming, it was the perfect time to give this recipe a try. Peanut butter is a staple in our home just like it is in a lot of homes.The only thing I needed to purchase to make this pie was the peanuts. I opted for dry roasted.

Saturday afternoon I gathered the ingredients for the crust and placed the first few ingredients in my Ninja blender, since I don’t’ have a food processor. After a few pulses I added the next set of crust ingredients and gave the blender a few more pulses. I ended up adding the full 6 tablespoons of ice water. With a couple more pulses was ready to form a disk and put the crust in the refrigerator.

After two hours I pulled the peanut dough out of the refrigerator and placed it between two pieces of parchment paper, rolled it out and  placed it in a pie plate.

Putting the filling together was as easy as pie (ha ha). I had a little bit of sorghum in the pantry but it wasn’t quite as much as the recipe calls for so I just added some dark corn syrup to equal the 1/3 cup needed. Since I had half-and-half in the refrigerator, I used that instead of the evaporated milk. In no time I had the filling mixed and scooped it into the crust.

Into the oven the pie went, on a rimmed cookie sheet.  I set the timer for 10 minutes and then lowered the oven temperature to 350. Forty-five minutes later I checked on the pie and it was pretty jiggly so I let it go another 10 minutes. It was still way too jiggly. After another 10 minutes, it was done. The last 20 minutes I covered the pie with foil to keep it from over browning.

After standing outside in the sweltering heat Sunday afternoon looking at the back of our house and discussing the potential project, we went into the house and had dessert with Hannah and James.  The first thing James and Brad said was it reminded them of a pecan pie. I thought that was a stretch, but they can have their opinion. Overall, we liked this pie; however, I’d much rather have pecan.

I sent a large piece of the pie home with Hannah and James for their two boys. She thought they would really enjoy it and was appreciative.

This pie is good. If you like peanuts I think it will be a hit. It is super rich and you might consider having a tall glass of milk next to your plate when you eat it.

I’ll be adding this recipe to my self-made cookbook, but it takes second place to pecan.

Roasted cabbage turns out to be a surprising success

One of the new vegetables Brad tried growing this year was cabbage. He likes it and so does our daughter... read more