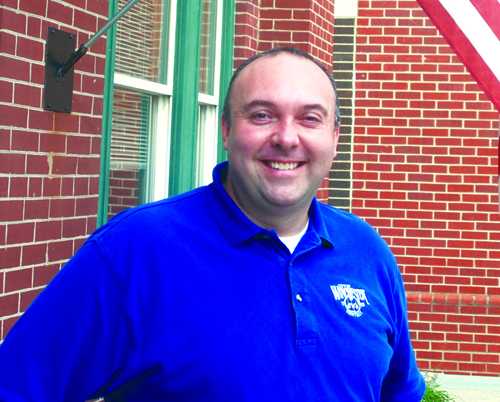 With the close of business today, Matt Belcher’s term as city manager of Winchester will end.

Earlier this month, Belcher said he was resigning after more than seven years as the city’s day-to-day manager and 15 years working in local government.

Following a farewell celebration Wednesday afternoon at Winchester City Hall, Belcher said it was time to try something new for a while.

An opportunity presented itself earlier this summer for Belcher to become a partner and manager of a transmission repair business in Lexington.

“I’m looking forward to a new set of challenges and new adventures,” he said. “There’s a lot of unknowns.”

In retrospect, Belcher called his time at Winchester one of transition.

There is always a long list of things to work on for a city manager, he said, from the routine management issues and situations within a government to annual projects of developing the city budget to overseeing major construction projects in town.

“Trying to address those quality-of-life issues that affect neighborhoods in addition to the day-to-day activities,” he said. “That consumes a lot of my energy.”

There were lot of large projects, some of which are set with anticipations of growth and others which ultimately ended.

“There’s a lot I’m proud of,” he said. “The downtown TIF (tax increment financing) district and downtown development fund are the backbone of additional development and getting private industry involved” in downtown Winchester.

The development fund, funded by the city, county and other agencies, allows property owners to apply for grants to pay for different projects, including facade repairs. The TIF will reinvest part of the revenue into the specified district of downtown.

Elsewhere, there have been storm water projects, dilapidated homes to be demolished, redevelopment projects along Lincoln Street, not to mention the state pension situation and the continuing coronavirus pandemic.

The project to renovate and save the Sphar building on North Main Street was another big goal, but one that ultimately was not completed as imagined. When bids continually came in over available funds and the building continued to deteriorate, the city decided to pull the plug and the building was demolished.

There’s plenty for Belcher’s successor to work on, including projects to extend Seventh Street to provide an exit for truck traffic other than a residential neighborhood, completing the bypass around Winchester and developing the area around exit 96 of Interstate 64.

“There’s years worth of work,” he said. “Big things — It just takes time. For me, being impatient, I think I’ve lived so long around the reactive nature of government, and it takes time for a big project. It is disappointing to a certain extent because an issue when I came here is still an issue. It’s part of why I’m anxious to do something different.”

Belcher said he was most proud, though, of the relationships he has had in Winchester.

Jury trials can resume next week, but not in Clark