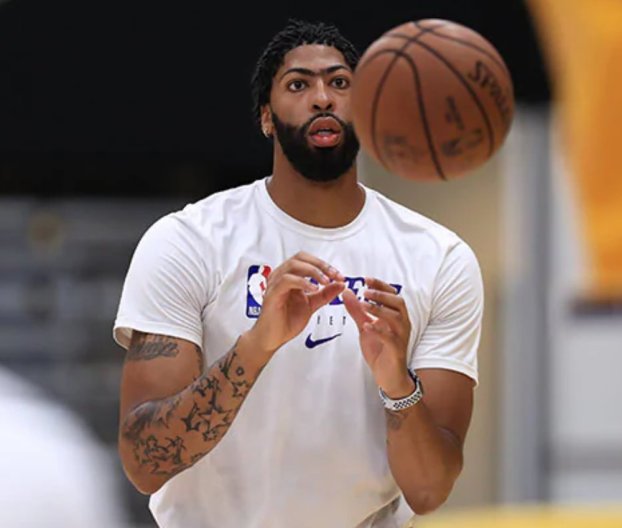 Anthony Davis is eager for the NBA season to resume. Davis is in his first full season with the Los Angeles Lakers. (LA Lakers Photo)

Anthony Davis is confident the Los Angeles Lakers can win the NBA title once the season resumes this month in Orlando.

“I think our chances are higher, just because we’re all rested and we’re ready to go,” Davis said. “If anything, our chances got tighter and it’s going to be about just who wants it more.”

The former Kentucky standout, who helped lead the Wildcats to a seventh NCAA title more than eight years ago, turned 27 when the NBA suspended the season because of the COVID-19 outbreak that continues to hold a tight grip on the sports world.

Although he hasn’t been with his teammates, including LeBron James, for more than three months, Davis said the team will be “stronger together” coming out of the pandemic.

“Everyone in Orlando, we’re going to obviously be talking about everything that’s going on from a social injustice standpoint,” he said. “And … the NBA, I think at that time we’re going to be the only ones on TV. So I think we’re able to have more people in the room from other teams, and receive other ideas and figure out how we can change the world.”

Davis admitted the sudden stoppage was “kind of a bummer” but the long layoff gave Davis a chance to heal up from nagging injuries, ranging from his elbow, ankle, knee, and to his shoulder this season. Davis has played in 55 of the team’s 63 games this year.

“It’s been good for me to let some of the lingering injuries I had toward the time when the NBA stopped kind of recover and heal,” Davis said. “… get back into the best version of myself. I feel 100 percent healthy. Well, I don’t (like) I am (100 percent healthy). I feel like I’m ready to go.”

In his first full season with the Lakers, Davis is averaging 26.7 points, 9.4 rebounds per game and and has recorded 27 double-double performances. He also is a defensive stopper in the post and has collected 2.7 blocks.

“Hopefully the best is yet to come,” Lakers coach Frank Vogel said. “Any time Anthony Davis takes the floor, you have a chance to see something special. He continues to get better, and he works extremely hard.”

Davis and the rest of the players in the league will be playing without fans in the stands when the season resumes. Davis said it will be difficult to compete on the floor without the support from the team’s followers at home and on the road.

“Obviously we feed off Laker Nation, home and on the road,” he said. “It’s going to be very different not being able to have them by our side during this time. It’s going to be more of a mental thing than anything. If you’re having a bad game, there’s not going to be fans there to get you going. As we say on the team, you gotta bring your own energy … I think we’re motivated as a team, and self-motivated to win.”