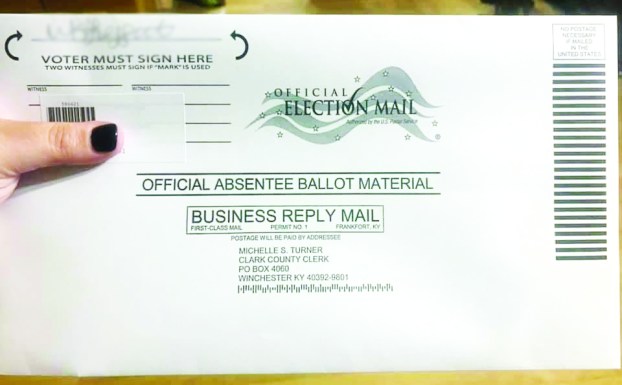 The deadlinet to request mail-in ballots has passed, but ballots can still be mailed in, if postmarked by 6 p.m. Tuesday, June 23, or turned in at the Clark County Courthouse. Voters can also schedule an appointment to vote absentee at the courthouse, or vote at Campbell Junior High School on Primary Election Day. (File photo)

Half a million Kentucky voters applied for mail-in ballots before the deadline Monday for the June 23 primary election. That’s nearly 27 percent of all the registered voters in the state and almost 7 percent higher than the turnout in the last presidential election.
In Clark County, the numbers are even stronger.
According to Deputy County Clerk John Ballard, 8,554 Clark County voters applied for mail-in ballots out of 29,944 registered voters — about 28.5 percent.
Ballard said there are still some ballots that have not been returned, but if most of them do, that will be a relatively high turnout compared to previous primary elections.
In addition to the mail-in ballots, 918 people have voted by absentee ballot machine at the courthouse, and they may still do so up until 5 p.m. Monday, when the County Clerk’s Office closes.
On Tuesday, which is Primary Election Day, voters will have the option of voting in person at the one polling place in the county, Campbell Junior High School on Boone Avenue.
Because of the risks of the highly contagious novel coronavirus, the governor and secretary of state agreed this year to allow anyone to vote by absentee ballot, either through the mail or in person, and to have a limited number of polling places rather than have voting at all the precinct locations.
On the ballot Tuesday will be contests for the Republican and Democratic nominations for president, U.S. Senate, the U.S. House 6th District seat and Kentucky House District 73.
Candidates for the Clark County Board of Education and Winchester Board of Commissioners get a pass until the Nov. 3 general election because there aren’t enough candidates for a run-off.
Republican President Donald Trump and Democratic former Vice President Joseph Biden have already secured their parties’ nominations for the presidential race.
In the U.S. Senate race, Senate Majority Leader Mitch McConnell, R-Ky., has six challengers for his party’s nomination, including tea party favorite C. Wesley Morgan of Richmond, a former state legislator. The others are Nicholas Alsager, Paul John Frangedakis, Louis Grider, Naren James and Kenneth Lowndes.
On the Democratic side, former Marine Lt. Col. Amy McGrath of Lexington has raised more money than all the other candidates combined, but has encountered strong late challenges from Louisville state lawmaker Charles Booker and Mike Broihier, also a lieutenant colonel and a farmer and former newspaper editor. Other Democrats on the ballot include Jimmy C. Ausbrooks, Maggie Jo Hilliard, Andrew J. Maynard, Eric Rothmuller, John R. Sharpensteen, Bennie J. Smith and Mary Ann Tobin.
Brad Barron is the lone Libertarian Party candidate.
In the District 6 U.S. House contest, U.S. Rep. Andy Barr, the Republican incumbent, has two nominal challengers, Chuck Eddy and Geoff Young, both of Lexington.
In the Democratic side, Josh Hicks, a lawyer and former police officer and soldier, is the Democratic Congressional Campaign Committee’s choice. He faces Daniel Kemph of Lexington, who ran for the seat before.
The only Libertarian candidate is Frank Harris.
In the 73rd state House District, Republican incumbent Rep. Les Yates faces a challenge from a fellow Winchester resident, businessman Ryan Dotson, a former conservative Democrat.
On the Democratic side, the candidates also are both from Winchester: Kenny Blair and Rory Houlihan.
For more information about voting and to see sample ballots, visit govoteky.gov.