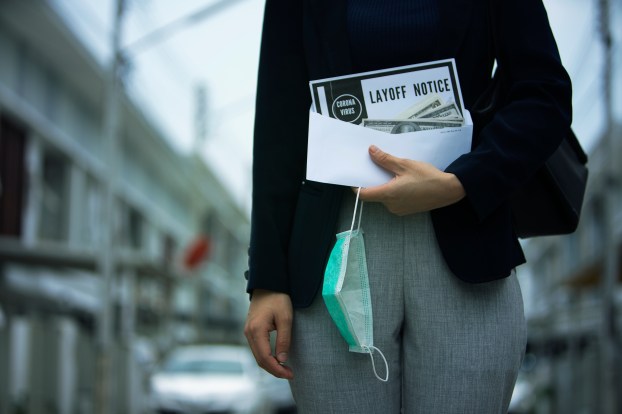 COPING WITH COVID-19: As millions of Americans lose jobs because of coronavirus, they look to overwhelmed unemployment insurance program to get by

Editor’s note: Coping With COVID-19 is a multi-part series about the very personal ways Winchester and Clark County have been impacted by the outbreak of the novel coronavirus (COVID-19).

Until the coronavirus pandemic hit Kentucky in March, 36-year-old Tiffany Messer had been working for about five months at Univance, a local factory, where she worked as a temporary employee on a line producing car parts.

On March 26, Messer said, her employer announced that they would be closing immediately because of the COVID-19 outbreak.

“They called us over and told us that today would be our last day,” Messer said in a phone interview Thursday.

That day, Messer went to the break room and applied online for unemployment insurance. As of Thursday, she has yet to receive any benefits.

“I knew the process would be hectic, so I wanted to go ahead and get it started,” she said.

Messer said the online application process “seemed easy,” until she submitted the full application and received an error message.

Messer said she “can’t get through to anyone,” about her claim, which means she has no idea if she’s been denied or it there’s something wrong with her application.

Without her unemployment insurance, Messer’s family is struggling to make ends meet.

Messer’s experience isn’t an isolated one, as millions of Americans are applying for unemployment insurance because they lost their jobs amid the outbreak of the potentially deadly coronavirus.

According to the Kentucky Center for Statistics, nearly half a million (490,844) unemployment claims had been filed in Kentucky between March 15 and April 19, the last date for which data is available.

Of those claims, 4,521 were from Clark County residents. Those claims account for approximately 26 percent of the county’s total workforce of 17,363 reported by the Kentucky Cabinet for Economic Development in April 2019.

More than 50,000 new claims were filed in Kentucky in the week beginning April 19 alone.

Clark County’s claims skyrocketed the week of March 15, when Gov. Andy Beshear began mandating businesses close to protect against the spread of the virus.

WalletHub, a personal finance website, routinely compares the job loss caused by the virus outbreak to The Great Recession, which ended in 2010 and resulted in about 8.8 million jobs lost. There were approximately 22.7 million jobs created from February 2010 to February 2020, but the job loss because of the coronavirus has wiped that success. So far, 36.5 million jobless claims have been issued in the U.S. since the week of March 16. The most claims came the week of March 23, when 6.9 million new jobless claims were reported. The U.S. Bureau of Labor Statistics reports that the unemployment rate rose to 14.7 percent in April, a 10.3 percent increase over March. This is the largest over-the-month increase since 1948, which is the earliest date that data is available. Kentucky’s unemployment rate was 5.8 percent in March 2020, up from 4.2 percent in Feb. 2020, marking the first increase of more than .1 percent in a decade.

Kentucky has the fifth-highest unemployment rate in the U.S., behind only Louisiana (6.9 percent), West Virginia (6.1 percent), Pennsylvania and D.C. (6 percent) and New Mexico (5.9 percent).

The newest state employment and unemployment data for April 2020 are scheduled to be released on May 22.

With so many people out of work, Americans, like Messer, are struggling, according to Federal Reserve survey results released Thursday.

“One in five people who were working in February reported that they lost a job or were furloughed in March or the beginning of April 2020, the data showed, and that pain was highly concentrated among low earners,” the survey revealed.

Thirty-nine percent of former workers living in a household earning $40,000 or less lost work, compared with 13 percent of those making more than $100,000.

“Half of those who lost a job or work hours said they were at least OK financially, while the other half were experiencing greater financial difficulties,” the survey, which was conducted April 3-6 interviewing 1,000 U.S. adults as a follow up to a 2019 survey of more than 12,000 U.S. adults to gauge the impact of the coronavirus. “Based on the supplemental survey, 13 percent of all adults said they lost a job, were laid off, or were told not to work in March. This suggests that 20 percent of people who were working before the pandemic lost a job in March. Six percent of all adults were not laid off but had their hours reduced or took unpaid leave.”

Individuals who lost a job or had reduced hours reported difficulty in paying bills.

Messer said her family of six includes her, her boyfriend and four children. She was able to secure SNAP assistance with food, but other expenses are piling up and they’re falling behind on bills.

Right now, the family is relying solely on Messer’s boyfriend’s salary, but with other debt obligations, it’s barely enough to get by.

She used her stimulus check to make their current and late house payments and buy some essential items for the household, but “that left her with only about $30.”

Her phone was cut off this week because she couldn’t pay the bill, and the truck she was using to get around broke down needing a $179 repair that they can’t afford.

“We’re running out of stuff in our house,” she said. “We’ve had to ask family to borrow things that we need to simply get by.”

Even though some essential things, like electric and water service, won’t be cut off amid the outbreak, Messer said they are falling further behind on those bills and will have difficulty paying them up when things return to normal.

As of early April, 18 percent of adults said they could not pay all of their current month’s bills in full, according to the Federal Reserve survey, with greater difficulty in paying bills among those laid off or working fewer hours.

Some families get help, find a way

While many families are struggling to make ends meet, others have been able to apply and secure unemployment benefits.

Parks and Rec closed March 13, and Atwood said she still technically has a job at the facility, but it not being paid during the shutdown.

“I initially didn’t think I would be able to apply because I didn’t make much,” she said. “It was a side job to through school.”

After some encouragement from her husband, Atwood applied in April and was quickly approved.

“I was one of the lucky ones,” she said. “I’ve already received two checks.”

But Atwood said she knows others whose experiences have not been so easy, including her step-dad, who owns a logging company and still hasn’t received any UI benefits.

She said her family would have struggled had she not been approved for the benefits, but they “would have made it.”

“It feels good to be able to help my husband using these benefits,” she said. “It’s good to take that financial burden off him.”

Atwood said this is the first time she’s needed to use unemployment insurance. She’s worked since she was 16, and “it’s odd to have to apply for it.”

But she’s glad it’s there to help the many families in need right now.

“I just hope those who have not been able to get assistance yet can get it soon,” she said. “I feel bad for them and hope they can get the relief they need.”

For others, the process for applying for unemployment was too cumbersome, and they turned to other ways to make ends meet.

He had to close shop March 17. The following week, he tried to file an unemployment insurance claim. Because he has filed a UI claim about five years ago, his information was already in the system, but that created problems.

“The application kept asking me questions as if I had been laid off from a job or something,” he said. “I kept trying to answer in a way that indicated I was a small business owner. I had to fill out an extensive employment history. When it got to the end, I wasn’t sure the application ever really submitted.”

He got a screen providing information about how to apply for work, and that’s when he knew there was something wrong with the application.

“I wasn’t looking for work,” he said. “I was a small business owner who had to shutdown and needed assistance in the meantime.”

About a month later, Rhodus received a denial letter in the mail.

He decided to open his shop for curbside pickup only, and has been able to save the local store.

“We would have been able to make ends meet personally,” Rhodus said, because his husband is still working and being paid. “Our concern was the shop, because it pays for itself.”

Mason said he missed the prom season, when he would have made thousands of dollars off bow tie and corsage orders.

“That would have carried us to Christmas,” he said.

Thankfully, the community has shown up in a supportive way.

“The love of the community has been a bright spot for me,” he said. “People are buying things every day. Every time I posted something online, it was purchased.”

He even started using his sewing skills to make cloth face masks, which are selling fast.

“We’re no longer worried about the business or not being able to prevail,” he said.

Failed by the system?

Messer continues to wait for the assistance she needs, and is eager to get back to work.

She said that about two weeks ago, she got a call from a representative who told her they couldn’t assist with her claim, and she needed to talk with a “tier two agent.”

“I was super excited thinking I was about to get things worked out,” she said, but she waited on hold for 15 minutes before being sent to an automated message that told her she was placed on yet another callback list.

“They said it would be about 24 hours before I got a call back,” she said. “That was two weeks ago.”

Messer feels failed by the system.

Messer said the days get harder and harder.

“Sometimes, I just sit and cry,” she said. “There’s nothing I can do. All we can do is keep trying to get the help we deserve. There’s got to be a light at the end of the tunnel.”