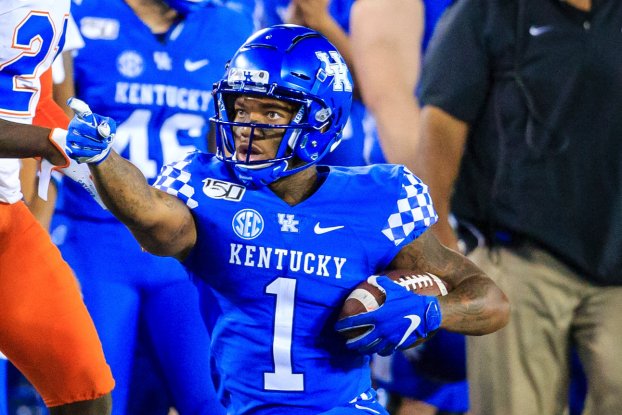 Lynn Bowden was selected in the third round and the 80th overall pick in the NFL Draft on Friday night. (Kentucky Today/Tammie Brown)

The University of Kentucky standout was selected in the third round of the NFL Draft by the Las Vegas Raiders. Bowden was the 80th overall selection and third pick of the draft by the Raiders.

“(I’ve) been waiting on this moment since the age of four,” he said. “Thank you Raiders for making my life-long dream come true! Vegas let’s go!”

Although a receiver during his first two seasons at Kentucky, Bowden took over at quarterback after starter Terry Wilson went down with a season-ending knee injury and backup Sawyer Smith was injured at South Carolina. From that point on, Bowden guided the Wildcats (8-5) to a fourth consecutive bowl appearance and a 37-30 win over Virginia Tech in the Belk Bowl last December.

Bowden won the Paul Hornung Award last year and rushed for 1.468 yards and 13 touchdowns last year. He hauled in 30 passes for 348 yards and one touchdown. He rushed for more than 200 yards in three games.

Raiders General Manager Mike Mayock said the team plans to use Bowden as a punt returner and running back.

“Ultimately, he’ll probably be what we call a joker, which is what I love in [head coach] Jon [Gruden’s] offense,” Mayock said on the team’s web site. “It’s somebody who can do multiple jobs. But day one, he’s going to come in and be a running back. In the SEC two years ago, he caught 60-70 passes as a slot.

“Last year as you guys know he was quarterback-wildcat. He gained over 1,000 yards. We think he’s one of the most athletic, tougher guys in this year’s draft. We’re going to train him to be running back, if he’s able to do that job, we’ll be able to do some other things with him.”

Regardless, Kentucky recruiting coordinator Vince Marrow said Bowden will excel at the next level.

“NFL, get ready a dog is coming,” Marrow tweeted after Bowden was selected by the Raiders.