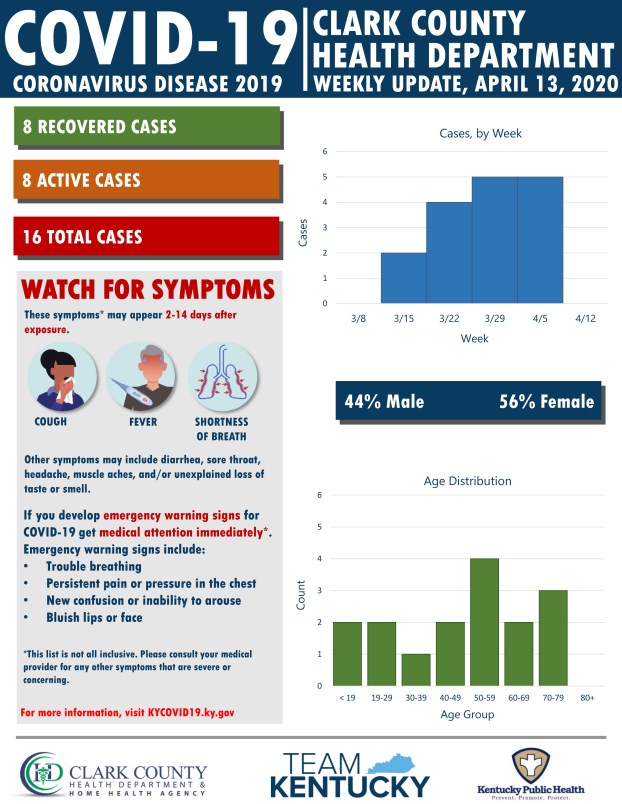 At least eight of the people in Clark County with confirmed cases have recovered, according to Public Health Director Becky Kissick.

The local Health Department has released an information graphic showing that as of April 13, when there were 16 confirmed cases in the county half of that number have fully recovered. 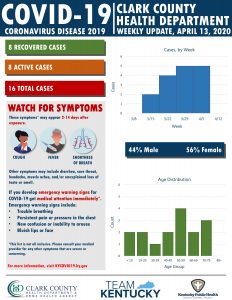 As of Tuesday, there were 18 confirmed cases, so the numbers were off slightly. But the statistics in the graphic prepared by a regional epidemiologist showed that 44 percent of the overall local cases were male and 56 percent female, the age group with the largest number of cases was between 50 and 59, followed by those 70-79.

The number of cases per week doubled from March 15 to 22, then started to plateau in the third and fourth weeks.

Of the eight who have recovered, none of them are showing symptoms such as fever, dry cough and shortness of breath.

Kissick said it’s estimated that about four out of five patients will have “a mild case and are going to be fine at home,” and the Health Department is seeing that “positive outcome.”

Kissick said that there have been no coronavirus-related deaths in Clark County.

She wouldn’t say how many of the 18 cases reported as of Monday evening had been hospitalized because of medical privacy laws.

“I’m not comfortable releasing any of that information,” she said.

She said she would provide more up-to-date information when it is made available to the Health Department.

Kissick said she has been impressed by Clark County’s response to the coronavirus crisis.

“This community has done an amazing job of supporting one another and supporting public health, and we’re very thankful for that,” she said. “We look forward to continuing to flatten that curve and transitioning back to normal.”

Every community in the country will be affected by the novel coronavirus, but differences in health and socio-economic factors will... read more