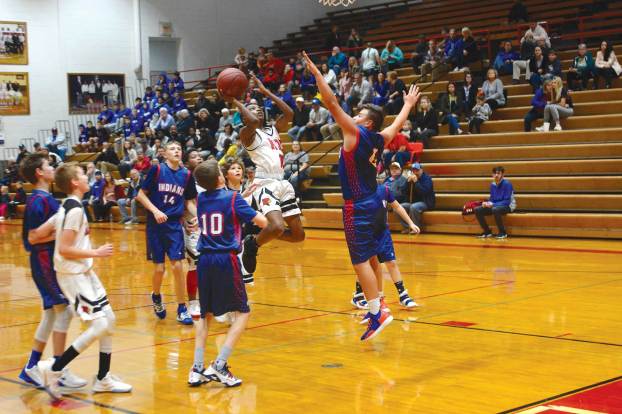 Montez Gay provided a spark off the bench, scoring 18 points to help send the sixth-grade game to overtime. (Photo by Roman West)

The sixth-grade team started the night off slow, falling behind 5-14 by halftime. But the Cardinals didn’t give up and rallied behind Montez Gay. Gay scored 18 points off the bench after not playing in the first quarter.

Entering the fourth quarter, the Cards trailed by five points. Gay scored 10 of his 18 in the fourth and tied the game for the first time after finishing a three-point play with less than a minute remaining in regulation.

The Cards couldn’t complete the comeback and ultimately fell 30-29 in overtime.

The seventh-grade team had the same fate early, falling behind by double digits before halftime, but Eli Craig’s team-high 11 points gave them a chance to win. Their full-court pressure came on late in the game and caused the Indians to turn the ball over multiple times, but RDC wasn’t quite able to put enough points on the board to take the lead and fell 46-38.

The eighth-grade team, who entered the game 3-0, had a different story than the first two Cardinals’ teams. They opened the game by scoring the first eight points and took a 25-3 lead at the end of the first quarter.

They didn’t take their foot off the gas, pushing their lead to 45-8 by halftime.

With a commanding lead, the Cardinals were able to get production out of their bench, and the team won 63-20, their largest margin of victory of the season.

JP Gaines led the Cardinals with nine points, followed closely by Brady Davis and Cooper Wasson who each finished the game with eight points.

The Cardinals will compete in the Powell County Panorama this weekend and are back at home on Dec. 5 when they take on Georgetown in a conference matchup.

George Rogers Clark’s boys soccer team had the opportunity to celebrate their achievements from this season on Saturday as they... read more