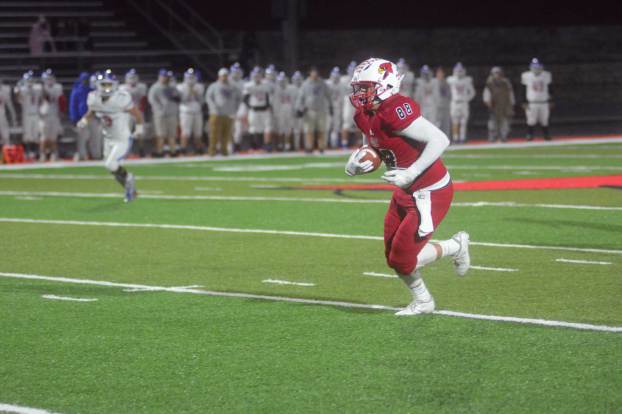 Dylan Gibson was wide open during his first touchdown reception of the night against Madison Central. (Photo by Roman West)

ATHLETE OF THE WEEK: Dylan Gibson

Dylan Gibson is a junior tight end and punter for the George Rogers Clark Cardinals. Gibson picked up two touchdowns and a big first down late in the game in GRC’s win over the Madison Central Indians last week, helping give the team their first playoff victory in a decade.

GIBSON: Camaraderie of my team.

Q: Did you set any personal goals before the season?

G: A couple of goals that I set for myself at the beginning of this season were to become the player my team needed and could count on. I also challenged myself to earn a spot on the All-American Bowl team.

Q: Do you have any athletes you try to model your game after?

G: I like modeling my game after Rob Gronkowski. He’s not only a phenomenal player but an entrepreneur that works hard for his successes.

G: I would say my favorite memory would be winning districts and seeing and feeling what it really feels like to be great and have the whole town behind your back.

Q: Who has had the most influence on your football career?

G: I’ve had many great influences as a football player, lots of terrific coaches. Yet my parents have been the most significant influential factor in my football career. They always push me to be my best, encourage me through the challenges and always keep me humble.

Q: Did you set any team goals before the season?

G: Our team set out this season to breakdown barriers and bring home some trophies. We wanted to be the team that brought the fun back to Friday Night Lights in Winchester.