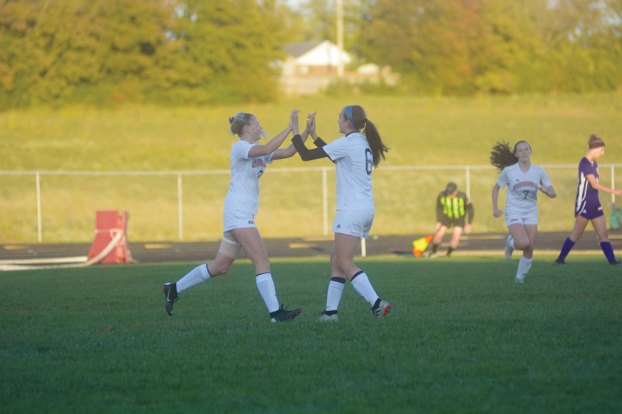 Delaney Manning (left) congratulates Julia Pohl (center) after she scored a goal off of an Allie Bush (right) assist in Thursday’s game against Campbell County. (Photo by Roman West)

George Rogers Clark traveled to Harrison County Thursday night to compete for a shot to play in the 10th Region Championship. A tough matchup in the semifinals with Campbell County, the region’s best defense and a team that tied with GRC in the regular season, was the only thing that stood in their way.

The Lady Cardinals’ offense got going early with Delaney Manning scoring from a Leslie Hernandez assist eight minutes into the game.

Hernandez then got in on the scoring herself as she put in a free kick that flew in just over the goalkeepers head.

The goals continued to come in as Julia Pohl received a pass from Allie Bush that she was able to get past the keeper, putting the Cards up 3-0 15 minutes into the match.

Campbell County was able to regain their composure late in the half and had some opportunities to score, but GRC goalie Carrie Stevens was there to preserve the Cardinals’ shutout and head into the break with their three-goal lead.

Bush came out of halftime and scored her first goal of the game, extending the lead to 4-0.

With nine minutes remaining, Manning put in her second goal of the night to tie the most goals the Camels had allowed all season and give the Cardinals a 5-0 victory.

“Anytime you can make a region championship it’s a big deal,” head coach Matthew Abner said. “We’ve been very fortunate to win the past three years, but it’s not easy to make for any team. We don’t have an easy region at all, they’re all quality teams.”