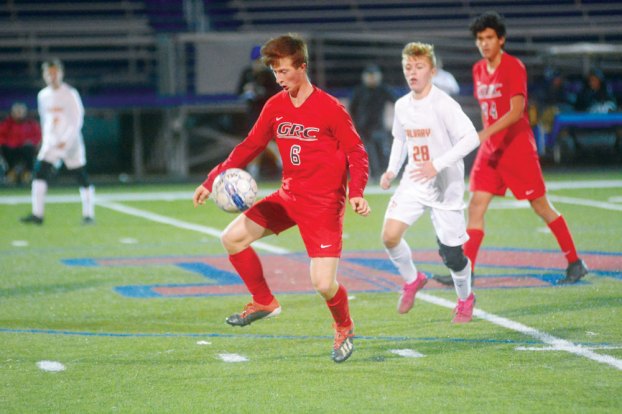 Following a Campbell County victory in penalty kicks over host team Montgomery County, George Rogers Clark hit the field on a cold Wednesday night to compete for a chance to play in the 10th Region Championship, a game GRC hasn’t played in since 2007.

The Cardinals fell behind early as Calvary Christian possessed the ball for most of the beginning of the game and eventually scoring on a corner kick midway through the first half.

But the Cardinals were able to swing momentum as they have all season after finding themselves in a hole. Brandon Beltran put in a goal with 10 minutes to play in the first half.

The game got chippy from there for the remainder of the period, Beltran picked up a yellow card and each team was called for a handful of fouls. But the two teams entered the break squared at 1-1.

The Cougars came out in the second half shooting, as they have all season as one of the state’s best offenses. They put the ball in the back of the net 10 minutes into the half but had it called back due to an offsides penalty.

It looked as if GRC would take a lead on a through ball to Skyler Hamon that he then nutmegged the keeper with. However, the ball drifted just wide of the goal post.

Calvary Christian continued to put the pressure on GRC’s defense, painting the corners of the goal. They got one to fall with 23 minutes left in the contest, putting them up 2-1.

GRC couldn’t finish their opportunities to score and the Cougars were then able to score again, pushing their lead to 3-1 with 10 minutes to play.

Beltran scored on the next Cardinals’ possession, giving them a chance with eight minutes remaining, but Calvary Christian was able to possess the ball, shielding off all GRC opposition for most of the remainder of the game, giving them a 3-2 win and ending the Cardinals’ season.

“I’m extremely proud of this team,” head coach Nicholas Vogler said. “If you look at where we were at the beginning of this season – we had to completely rebuild a defense with players who have never been back there before. We had to have a new tactical strategy. These kids bought in from day one and played their hearts out for each other. We just lost to a very, very good offensive team in Calvary Christian.”

Abner gets 100th career win as Lady Cardinals beat St. Patrick 10-0 in first round of region