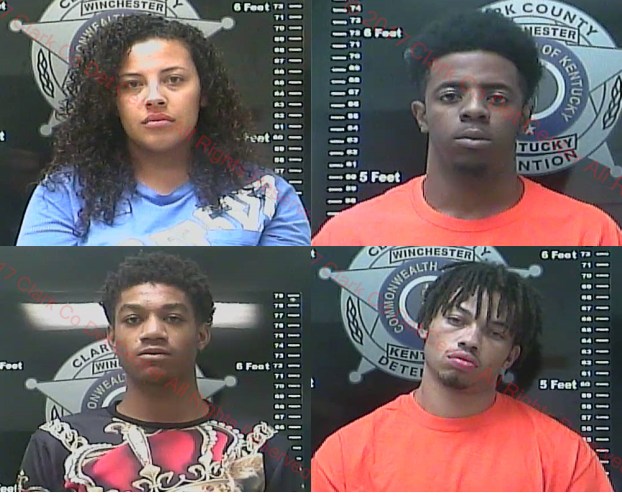 The two girls killed in a gunfight last week may have been caught in the middle of all the shooters, police said Wednesday in court.

During hearings in Clark District Court for suspects Denzel Hill and Darian Skinner, Winchester Police Sgt. Tom Beall testified 16-year-olds Kayla Holland and Adrianna Castro were leaving an apartment at 31 E. Washington St. around 9 p.m. Nov. 7 when a gunfight broke out between Hill, Skinner, Ronnie Ellis and Matthew Carmen, who have all been charged with complicity to commit murder.

Beall said Hill, Skinner and Ellis all arrived in a car driven by 18-year-old Mikaela Buford. Buford and another 16-year-old girl stayed in the car and did not see the shooting, he said.

The three got out of the car, spread out and approached the apartment complex, Beall said. Two eyewitnesses said all three had  handguns and all three fired. Carmen was on an upper level and also fired a handgun, according to witnesses, Beall said.

Carmen has also been arrested and charged with complicity to commit murder for the shooting. His preliminary hearing is scheduled for Nov. 22.

Carmen’s girlfriend Julia Richardson was charged with tampering with physical evidence and is also set for a preliminary hearing next week.

Carmen and Richardson had automatic not guilty pleas entered on their behalf in Clark District Court Monday. Carmen is held on a $1 million bond and Richardson’s bond has been set at $5,000. They are both lodged at the Clark County Detention Center.

In his interview with police Beall said Carmen admitted having the gun and firing it.

According to court documents, there was a prior argument that day at a Shell gas station on West Washington Street. Ellis, Skinner and Hill went to the apartments specifically to fight an unidentified person, who was with Carmen at the time.

Beall said the girls were coming out of an apartment at 31 E. Washington St., which shares a parking lot with 27 E. Washington, when the shooting occurred.

Afterward, witnesses said two of the males fled on foot while one got back in the car Buford was driving.

Beall said Hill and Skinner were located at a residence at 221 Madison Ave. when officers executed a search warrant around 5:30 a.m. Nov. 8.

While Hill did not make a statement to police, Beall said Skinner told them he had not left the house all night and that he was dog-sitting.

At this point, Beall said there was no indication that one person killed both girls.

Buford and the other girl in the car identified Skinner, Ellis and Hill from photo lineups, Beall said.

Buford’s attorney waived her case to the grand jury while Ellis’ attorney requested the hearing be postponed for two weeks to allow for additional investigation.

Assistant Commonwealth’s Attorney Heidi Engel said she intended to present the case to the grand jury before the end of the year.

All four remain in the Clark County Detention Center on a $1 million bond each.

About 200 runners and walkers take off to start the 10th annual Turkey Trot Saturday morning at Lykins Park. This... read more