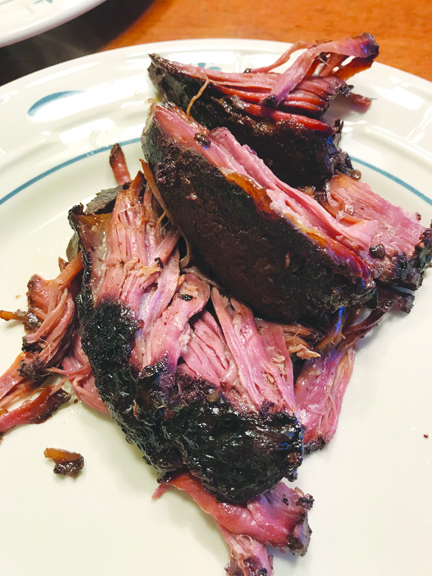 As I’ve told you before, I have tons of recipes that I’ve cut out of magazines, copied off the internet and marked in my library of cookbooks.

The recipes I’ve cut out or written down are all kept in folders that I’ve labeled  for chicken, other meat, desserts, vegetables, breakfast, etc.

I was going through my “other meat” folder looking for a non-chicken dish when I found today’s recipe. I have no idea where the recipe came from. It was just written on a green piece of paper in my hand writing.

The recipe seemed easy enough, and I knew I had chuck roast in the freezer. I headed to our big freezer in the basement and pulled out the biggest chuck roast we had. When I got back to the kitchen I weighed it and it was right at 4 pounds. I assume frozen isn’t any heavier than not frozen.

It took the roast a couple of days to thaw in the refrigerator. Since it needed to cook in the slow cooker for eight to 10 hours, I decided I’d get it ready before I went to work and supper would be on the table in no time after Brad got home.

After getting ready for work, I headed to the kitchen to start getting the roast ready. When I opened the refrigerator, I found the bag the roast was in (on the top shelf of the refrigerator) had a hole in it and blood had dripped everywhere.

I grabbed a large bowl, put the roast in it and began cleaning up the mess. After the mess was cleaned up and I had the roast in the cooker,  I remembered I’d not stopped at the grocery to pick up balsamic vinaigrette dressing. I figured I could make my own and decided to check out the internet to see if I could find a recipe.

I opted for one I found at allrecipes.com since I’ve had good luck with their recipes.

Along with the dressing ingredients, I added the onion soup mix and some Italian seasoning to a jar, gave it a good shake and poured it all over the roast.

I probably should have measured the dressing I made to see if it equaled 12 ounces (which is typically how much is in a bottle of dressing), but I didn’t. The mixture covered the roast really well. I put the lid on the cooker, turned it on low and headed out the door for work.

When I got home that evening and opened the back door, there was a wonderful aroma coming from the  kitchen.

To go with the roast I decided we’d have some steamed broccoli. Brad would have a sweet potato (freshly dug from our garden) and I’d have a regular white baked potato — you guessed it, I don’t care for baked sweet potatoes. Those went into the oven for a little over an hour. When they were ready, Brad had arrived home from work.

I got everything on the table, Brad said a prayer and we were ready to eat. Brad tries not to eat too much bread, so even though the recipe suggests it, we didn’t put the meat on buns.

Brad put meat on his plate and tried a bite before adding anything else to his plate. He said it was good, just as good as the roast he fixes; and by the way, his roast is awesome.

Before I could take a bite, he let me know I could make this dish again. Like Brad, I thought the roast was really good. It was tender and had a great flavor, it didn’t need the added salt or pepper.

This roast was more than enough for one meal for us. Since we didn’t need leftovers for the next night, I removed all the fat from the rest of the meat and froze it for an easy meal in the not too distant future.

In hindsight, I probably should have left the fat on the roast so the fat might keep some moisture in the meat when it is reheated. Oh well, I’ll have to remember that for next time.

As you’ve guessed by now, I nailed this recipe and it’s headed to my self-made cookbook.

1 shallot, minced (I used purple onion and just used what I thought would equal a small shallot)

Put all ingredients in a jar and shake.

Each year Halloween brings out lots of little ghosts and goblins, but they are not as spooky as what they... read more