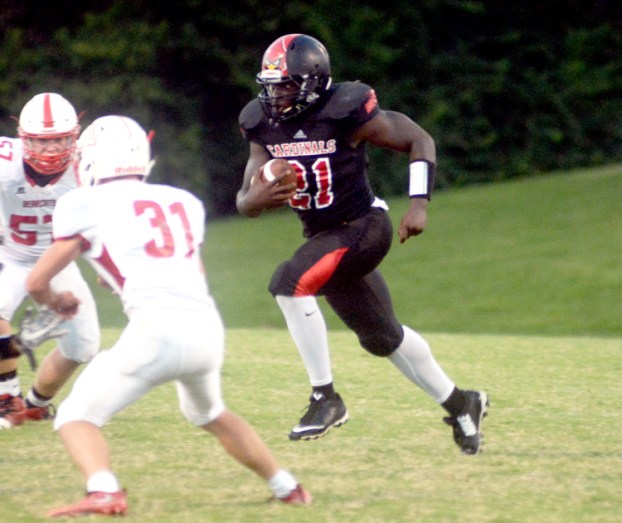 But the offense didn’t fare as well, turning the ball over four times. The Bearcats escaped Winchester with a 27-14 victory in GRC’s season-opener.

“Anytime we got anything going, we shot ourselves in the foot,” GRC coach Oliver Lucas said. “This is definitely a game  we shouldn’t have lost. We just didn’t get it done tonight.”

The Cardinals struck first after each team punted on their first possessions. Will Henry found Blake Jernigan on a short pass and Jernigan muscled his way into the end zone for a score. Tye Boyken’s point-after attempt was good and the Cardinals were up 7-0.

Anderson County took the following kick-off 88 yards for a score. The Bearcats missed their kick. GRC held a 7-6 lead.

Pearce Nisbet’s pass was picked off and returned into GRC territory, setting up a rushing touchdown for the Bearcats. They were up 12-7 and added another interception for a score before the end of the half.

While the GRC defense continued to confound the Bearcats, the GRC offense struggled to find any success of its own.

Henry was sacked in his own end zone midway through the third quarter  for a safety to make it 20-7.

Anderson added a 22 yard rushing touchdown to start the fourth quarter, to extend the lead to 27-7.

Nisbet scrambled for a 34-yard score with 1:29 remaining.

Three different Cardinals took snaps under center, as GRC continues to search for answers offensively in the young season. A number of players rotated in and out of different positions on offense.

“We’re trying to find someone who is ready to lead the team and step up and make plays,” Lucas said. “In spurts, some of them played well, but we need consistency.”

Some of what Lucas is looking for was evident in running back Nitavius Thomas, who had 95 yards rushing on 22 carries. He averaged 4.3 yards a carry and caught a screen pass for 52 yards in the second half.

The Cardinals out-performed the Bearcats in just about every category other than turnovers. Anderson held a slight edge in total rushing  yards — 121-108. GRC had 215 total yards of offense to Anderson’s 122.

GRC will focus on the positives — Lucas told his team after the game, “We’re still a good team” — as they travel to Harrison County next week.

“We’ve got to focus on improving what we do,” Lucas said. “We can’t correct the other team. All we can do is correct ourselves. We’ll look at ourselves and evaluate ourselves. Hopefully, we learn from our mistakes. It’s still a learning process.

“This is a good group of kids. They want to be winners and they’re working hard. We, as coaches, could have done a better job.”

A student-athlete has a number of things demanding focus and attentiong through a season, but for George Rogers Clark High... read more