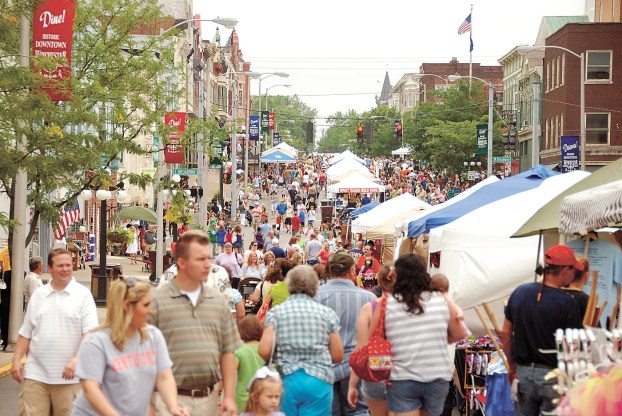 For the ninth year, beer cheese will be spread, dipped, sampled and devoured throughout downtown Winchester.

Saturday, June 10, will be the ninth annual Beer Cheese Festival and the first with title sponsorship from Shop Local Kentucky.

With a week to go, Main Street Winchester Director Rachel Alexander said 11 professional beer cheese makers are already booked for spots along Main Street and other vendors and non-profit groups will have their booths throughout downtown.

“We’ll have arts and crafts, Kentucky Proud, food … everything from Go-Go Burger to Crank and Boom,” she said. “We’ll have it all.”

The real star, of course, of the beer cheese, a concoction invented in Clark County. Festival-goers can buy a $5 wristband to try samples from 11 vendors from as far away as Wisconsin. Everyone gets a card to vote for their favorite cheese maker for the People’s Choice Award.

Judges will also pick a first, second and third-place winner, which brings cash, prizes and bragging rights for the next year. “Last year’s People’s Choice winner Hall’s and first-place Full Circle Market will be back to try and keep their titles,” Alexander said.

There will also be a contest for amateur cheese makers. Contestants can register Saturday morning, pay their $10 entry fee at Winchester City Hall. Each should bring eight to 12 tablespoons of product for the panel of judges to sample, she said.

Saturday’s events begin at 10 a.m. and continue throughout the day.

The newest thing at the festival is sponsorship from Shop Local Kentucky, a Lexington-based company that makes and sells Kentucky-themed apparel.

“They’ll have their Kentucky-branded merchandise as well as some beer cheese-themed shirts that won’t be available anywhere else,” Alexander said.

There will also be a pair of stages featuring a total of 10 bands throughout the day to offer live entertainment for the crowd.  The Clark County University of Kentucky alumni will return with their beer garden offering seven brands including West Sixth, Jarfly and Country Boy, she said.

The festivities actually begin Friday night with Cheesy Movie Night in front of the Clark County Courthouse. This year’s selection, “The Neverending Story,” will begin at dark, Alexander said.

All proceeds from the festival go to Main Street Winchester to fund downtown projects.

Businesses pitch in to help clean up after downtown fire

Debra Parr sat in the back of Heart to Home Services Friday, with the only light coming from the open... read more