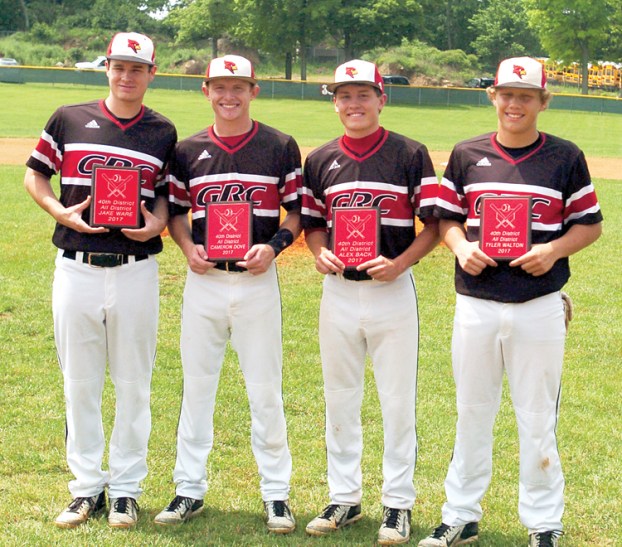 PARIS — It took a while for the Cardinals to finish off the 40th District Tournament championship game, but the George Rogers Clark High School baseball team wasted no time taking charge for a 7-2 victory.

The title game started Tuesday at Bourbon County High School, but lightning and rain delayed the game until Saturday.

Picking up at the start of the bottom of the fifth inning with the score 2-2, the Cardinals got a lead-off single from Jake Ware. Caden Easterling sacrificed him over to second and reached on an error.

In the bottom of the sixth, the Cardinals added insurance runs when Dakota Puckett and Jaxson Davis had back-to-back hits. Tyler Walton hit a three-run home run to make it 7-2.

“It took a couple days, but we got the ending we wanted,” GRC coach Matt Ginter said.

Ben Barrett worked both innings for the Cardinals, allowing a hit and a walk while striking out one.

Barett had been set to relieve starter Alex Back when the game was originally delayed.

“Other than the pitching, everything was the same. Our game plan stayed the same,” Ginter said.

GRC had graduation ceremonies Friday night and some players attended the all-night Project Graduation. That didn’t seem to affect Barrett.

“We talked to Ben before the game and he said he took a 45-minute nap and he was good,” Ginter said. “I believe in Ben, and we believe in what he can do.”

Barrett said the delay  and knowing he would start in the sixth inning didn’t change his approach.

“Anytime you pitch, you just want to pitch and you’re not worried about how many innings you’re going to work,” he said.

The three-run sixth inning gave the Cardinals some cushion going into the seventh mostly thanks to the homer off the bat of Walton, who experienced an offensive explosion in the district tournament. He also hit a go-ahead grand slam in the opening round game against Montgomery County.

“I’ve been working in the batting cage and felt really good this week,” Walton said.

“When it comes to the postseason, we step up,” Walton said. “We know how to win big games.”